“I would wholeheartedly recommend Royal Kiraz to anyone wanting to increase their HGH levels and improve their overall health”
Dr. Steven Lamm, MD Author of “The Hardness Factor: How to Achieve Your Best Health and Sexual Fitness at Any Age.”

You really CAN turn back the hands of time and reclaim a more youthful appearance, vigor, and health closer to your 20s and 30s!

The Secret is
HGH – human growth hormones!
The medical community has long known the anti-aging benefits of restoring your HGH levels back to what they were in your 20’s.
It’s been scientifically proven that plummeting HGH levels are one of the key causes of problems commonly associated with aging! Jumpstart your HGH production every day, and expect benefits associated with HGH, that include:

Skin that looks and feels firmer and smoother

Without the Hefty Price Tag or Risky Injections Royal Kiraz® and Royal Nar® is what’s known as an “HGH Releasing System.”

Completely natural and available without a prescription, this triple-advantage anti-aging system has been scientifically formulated to encourage your body to release more of your own HGH

Rather than injecting a foreign, synthetic source!
It gives the average person access to the anti-aging benefits of HGH. 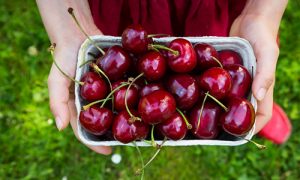 Cherry (cherry) is a fruit that originates from the northern hemisphere and thrives in temperate regions. The name “cherry” comes from the Latin ““ which is the name of a place in Turkey where this fruit was first discovered.

Various cherry varieties are widely cultivated which include wild cherry, sweet and sour. This fruit is mainly grown in America, the Iberian peninsula, the Baltic region, Scandinavia, and Canada.

Traverse City in Michigan, United States, is considered as ‘Cherry Capital of the World’. Cherry trees are highly valued in Japan with attractive flowers and an important part of the beauty in spring.

Both sweet and sour cherries also have stable antioxidants, melatonin, and anthocyanin glycoside flavonoids that make their colors red.

Benefits of ingredients in Cherries are one of the foods that have the greatest antioxidant ORAC (free radical absorption capacity) value.

ORAC value of sweet cherries is even as high as strawberries. In addition, cherries are also enriched with zinc, iron, potassium, manganese, and copper.

Red pomegranate with the Latin name Punica Granatum has the nickname “super fruit” by scientific researchers. The name pomegranate comes from the French word “pomegranate”.

Pomegranate is believed to have originated from Iran which was later brought to Egypt in 1600 BC, at which time it was recognized as an important food source, also widely used as a medicine.

This can be seen from the relics of Egyptian society in the form of Egyptian paintings and tombs. Pomegranate is also considered a symbol of fertility and prosperity in several cultures.

The most prominent of the pomegranates is nothing but the content of polyphenols, such as tannins and anthocyanin delphinidin, cyanidin, , and pelargonidin glycosides in the flesh of the fruit. This anthocyanin will generally increase when the fruit is ripe.

Consumption of pomegranates in fresh conditions is strongly recommended because the pomegranate phenolic content can be decreased by processing and pasteurization techniques.

Pomegranates are also equipped with vitamin C, which amounts to 17% of daily needs per 100 g, vitamins K, E, B complex, potassium, manganese, phosphorus, and other minerals. Pomegranate dietary fiber is quite high and can be found in the edible parts of the fruit seeds. Cordyceps is the rarest and most valuable herbal ingredient in traditional medicine and its development is only in the mountainous regions of Tibet China.

The name Cordyceps comes from the kordyle word from Greek which means “stick”, and the suffix cep from Latin which means “head”. Cordyceps is a very unique and even magical plant.

Because Cordyceps is a plant that originates from caterpillars.

Cordyceps contains approximately 7% cordyceps Sinensis acid, 25% protein, 8.4% fat (of which 82.2% are unsaturated fatty acids), contains 20 types of amino acids (including 8 types of amino acids needed by the human body), and contains a lot of vitamins, minerals, ergosterol, , and various bases and biological enzymes.

Cordyceps mushrooms are rich in nutrients such as essential amino acids, fatty acids, peptides, vitamins B1, B2, B12, E, K, and other active substances. Inside Cordyceps contains natural immune regulating substances. In addition, to increase immunity, Cordyceps is also able to control excessive immunity. So as to avoid disease due to excess immunity.

Cordyceps has been used in Chinese medicine for thousands of years and is known as a “miracle drug”. In 1757 “The New Edition of the Herbal Medicine Book” and the “Collection of Books of Herbal Medicine” in 1759 and various Chinese medical books, there are detailed records of Cordyceps.

Butea Superba or known as Red Kwao Krua in Thailand is a plant herb in Papilonaceae. This plant has characteristics like grapes that creep, then wrap itself around large trees.

Most Thais use Butea Superba as a problem over sexual achievement and lack of interest in sexual activity. This plant has more than 15 acids and a unique component that gives an impression of human health.

The efficacy of this herbal plant resembles the ‘viagra’ capsule which serves to strengthen male energy. Especially, this Butea Superba herb helps blood circulation into the male sexual organs without giving the heart a pounding, trembling or fatigue effect, while making the penis erection faster.

In other words, even though Butea Superba is famous for its impression on male sex boosters but more and more days it can be found in this plant. Now let’s see what are the advantages of Butea Superba.

Maca is a type of root tuber that originally grew in the Andes Mountains, Peru (Junin Plateau), 3000-4000 meters above sea level, making it a plant planted in the highest region in the world.

Maca is a plant with high durability, can live in extreme weather, namely heat during the day and reaches freezing at night and accompanied by strong winds.

The Incas in Peru used it as a powerful medicine for heroes during the war 500 years ago.

Maca contains a lot of calcium which is easily absorbed in it, and also magnesium and a number of silica that we find very useful in treating calcium deficiency in the bones of children and adults.

After you join the Royal Family, you will get the support of a world-class community and the opportunity to earn extraordinary income.

Notice: WP_Scripts::localize was called incorrectly. The $l10n parameter must be an array. To pass arbitrary data to scripts, use the wp_add_inline_script() function instead. Please see Debugging in WordPress for more information. (This message was added in version 5.7.0.) in /home/royalfam/public_site/global/wp-includes/functions.php on line 5775